Watching my fellow U.S. citizens deal with shortages and boredom reminds me of the "normal" living conditions I've seen in my travels.  For example, when Stacey and I made a pit stop at a government building during an excursion on our honeymoon to Cuba last year, a state employee charged her 25 centavos for a few squares of toilet paper on her way  into the rest room.  She offered me none, and there was none to be seen in the men's room.  Tourists are often advised to bring their own toilet paper when staying at a hotel in Cuba.  This is the norm. 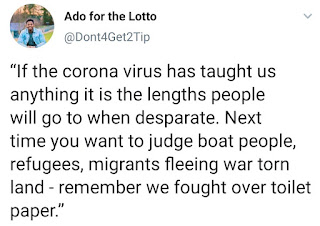 No matter what your politics, it's a reminder to us Americans that we take many things for granted. We don't know the true meaning of "desperate."

First and foremost, take care of yourself.  If you're sick, obviously get help.  Otherwise, follow the rules about sanitizing yourself, your family and your environment.

If you're bored and stuck at home during this quarantine era, there are plenty of things you can find for yourself to do.  The obvious is to sit and watch TV, whether it's movies, talk shows, catching up on soaps, or binge-watching your favorite Netflix series.  But you can only take that for so long.  Eventually, sitting on the couch is going to bring you down and you'll feel depressed.

I'm taking this as an opportunity to get projects done around the house.  I've often heard retirees say, "There isn't enough time in the day to be retired."  For so many of them, they've waited years to be rid of the obligation of spending 8+ hours a day at work and get to the tasks and social activities they've always desired.  I feel that way; even though I now have 24 hours a day to do as I wish, I still feel like I don't have enough time to get to all the projects I want to get done around the house.  We bought it a year ago, and while we've come a long way in making it "ours," there's still much to be done.

We are blessed.  The internet is a  modern tool that no other generation in history had to give us news from around the world in seconds.  If lonely, we can easily stay in touch with such programs as Skype, Facebook Time, Google Hangouts, Viber, WebEx, Jami, Talky and WeChat.  Many of these can be set up for multiple users so you can have group conversations.

Here are some more ideas for how to use your time:

Learn a craft; there are thousands of YouTube videos that teach you how to do things.  Same with learning a music instrument; I've seen music teachers offer free lessons via live chat.

Take up drawing or painting.

Find karaoke videos on YouTube and sing along.  No one is around to hear how badly you sing, so sing away!

Rearrange furniture, your cupboards, or your home office files.

Clean out your garage.

Rake your yard; it's spring!

Take a walk; ride your bike.

Write a blog, read other people's blogs.  Write your autobiography!

Organize your photos or computer files.

Play music and dance like no one is watching.

Play board games with your family.  Especially get those games out that have been collecting dust for years.

Read a book; many can be downloaded for free from the library.

Get your spring cleaning done.

Or the best advice of all:  Read all the posts in my blog!  Ha ha!

A Summary of My Life's Travel (so far)


I have always been thrilled by travel.  My mother once told me that, as a toddler and a young child, I would get out of breath, being so excited about travelling somewhere.  My parents loved the Adirondack Mountains, so much of my early life travel was to places such as Lake Placid, Lake George, and the Thousand Islands area.  We visited parks such as Storytown, Land of Make Believe, Gaslight Village, the North Pole, and of course, Santa's Workshop.  As my sisters and I got a little older, our family made visits to some places in Canada, including Lumina Resort in Muskoka, and Lake Winnipesaukee, New Hampshire.

A big travel phase of my life was when I was a member of the Greece Cadets Drum and Bugle Corps from 1972-1976.  Every summer, we would be away almost every weekend for Drum and Bugle Corps competitions.  I usually sat in the front seat of our bus, took in the sights as we traveled, and followed along on maps.  Maps were free from gas stations in those days.  Some notable cities and towns I remember competing in were Fulton, Oswego, Watkins Glen, Warren PA, Philadelphia, Baltimore, New York City, Marion OH, and Butler PA.

While in high school, I was active in WGMC radio when it was more of a community/student run station than it is now.  I was chosen to be a part of a delegation at the Intercollegiate Broadcasting System on three occasions.  We met in Washington DC, New York City, and Boston.

After I met my first wife, Mary in 1981, we got married in 1984 and honeymooned in Cocoa FL.  We visited Disney World (my first time there) and Kennedy Space Center.  Through our years together, and many with our three daughters, our travels took us to Toronto, Niagara Falls, Seattle, Florida, Vancouver BC for the World's Fair in 1986, Las Vegas, New York City, Philadelphia, and Europe.

For many years, my mother organized weekend trips every Columbus Day to a destination within a day's drive for her adult children and our families.  She paid for the hotel.  All my two sisters and I had to do was get our families there for a weekend of swimming in the hotel's pool and some sightseeing in the area we visited.

I worked in the control room at WHEC TV 10 for 32 years.  I spent about 25 of those years as an officer in NABET-CWA, the union representing control room workers and news photographers at that station and WROC TV 8.  Union business and conventions took me to places around New York State, as well as Florida, Kansas City, Anaheim, Las Vegas, Detroit, and Boston.  While these were work-oriented trips, I always managed to get in some sightseeing at the end of the day.

Until 2015, I sailed with Royal Caribbean, Carnival, Princess, Celebrity, and a Rhine River cruise on Avalon Waterways. Mary and I parted ways in January 2016 and I became a solo traveler for two years.  My life-long goal was to travel the world.  Being newly single, I accelerated my travel activities with multiple cruises each year and added Norwegian Cruise Line to my list.  I did Mexican/Caribbean cruises, a Mediterranean cruise and a Baltic Sea cruise.

Once I was ready for the dating scene again, the one promise I made to myself was that whoever I met needed to either travel with me or not hold me back if she didn't want to go.  I met Stacey in 2017 and she is as avid a traveler as I am! Our first trip together was a month-long land/sea cruise to Europe and the North Sea.  For our honeymoon, we booked two weeks on MSC, a back-to-back cruise that included Havana, Cuba.  To date, we've also been to New York City, Disney World, and a second trip to London because I was sick and in the hospital the first time we were there.

The enthusiasm I had for travel as a young child is just as strong as it always was.  Here are all the countries I've visited in my life so far:  United States (including Puerto Rico), Canada, Mexico, Honduras, Belize, Bahamas, Jamaica, Haiti, Barbados, Bermuda, British Virgin Islands, Grand Cayman, Cuba, Curacao, Martinique, St. Kitts, Turks & Caicos, France, Germany, Sweden, Netherlands, Italy, Spain, Switzerland, Denmark, Estonia, Russia, Finland, Norway, Iceland,  Scotland, and the Vatican (yes, it is a country unto itself).

I may edit and revise this post as my travels continue.  You can find further details about some of my trips elsewhere in my blog.

Travel Writer and Agent
travel.paulpakusch.com
at March 17, 2020 No comments: 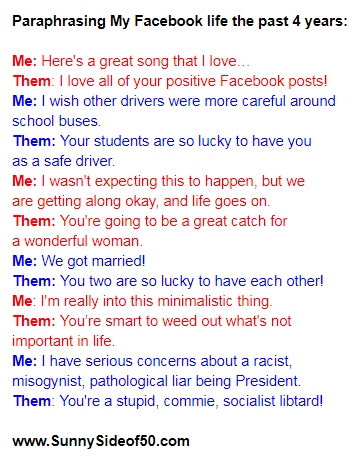